We like to be open and honest here at RealVeg, and we’ve been making some big decisions recently…so we thought it would be good to fill you all in.

Martin Wolfe made a decision back in the 90’s not to bring in any external materials onto the land at Wakelyns. All the fertility for the land is created with mixed clover leys ploughed in before growing a crop. So, we have a real responsibility to either honour that and not bring in materials, or if we do need to bring in materials (mostly for making compost) that they’re ‘clean’ from any contaminants and environmentally sound. The Soil Association, who provides Wakelyns with their certification, has guidelines which we need to comply with, but our ethics take us a bit further…see below…

Our ideal is to set up a closed loop system for our production needs; this is a system that sustains all that is produced on site. It also aims to create a surplus to distribute out of the system, it’s a permaculture practice, and one we advocate for. 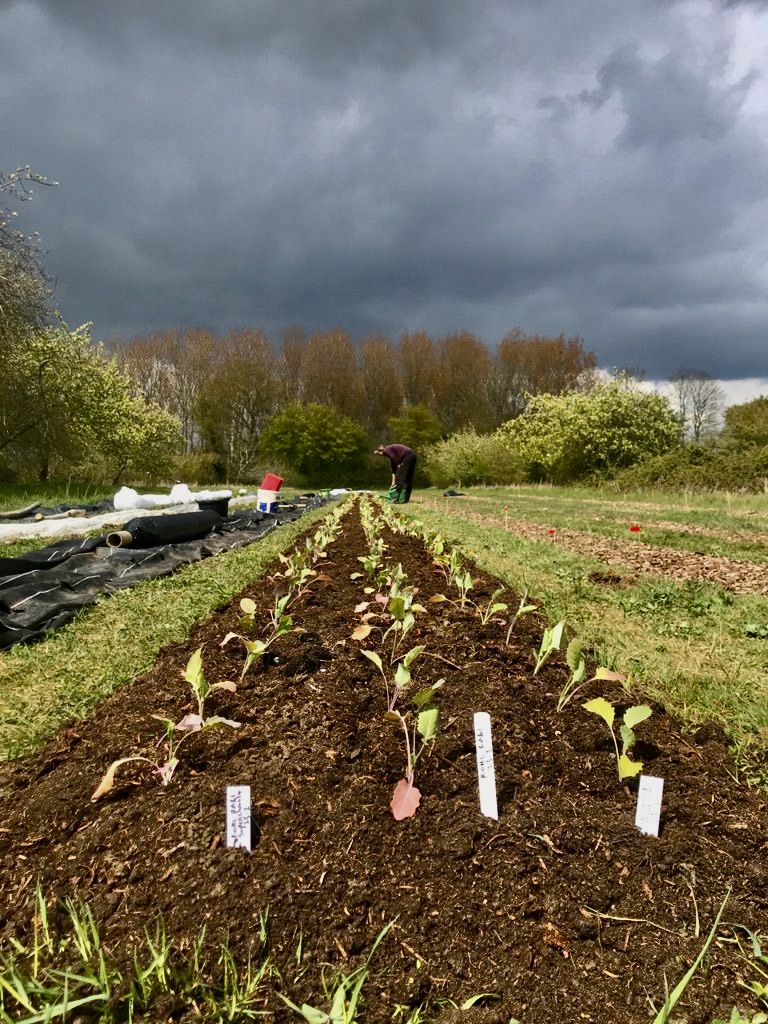 Unfortunately for us, Wakelyns haven’t needed compost due to the way they manage their farming practice, so we don’t have a ready made compost heap to make use of. And for no-dig you need a large amount of compost and mulch material to begin the system with.

The challenges we have are orientated around our desire to be no-dig.

In an ideal world we would chose not to plough. And so, to effectively control weeds, we need a thick layer of mulch material for the first year, plus a layer of cardboard, which blocks the sunlight to the weeds.

We started looking into possible resources we could use for our no-dig beds:

Initially it was proving a challenge to source ‘clean cardboard’. As a criteria for being on organically certified land we cannot use cardboard with any inks, tape, or coatings, etc. Through Wakelyns connections we found a great source – Hodmedods, who are organically certified and so know alot about their packaging, and what materials fit our criteria – Thankyou Hodmedods 🙂

The next component was compost:

Peat really needs to stay in the ground – this stuff takes thousands of years to be created, and holds more carbon than a forest. We have successfully destroyed or seriously damaged 95% of all of the UKs peat bogs already! Most of it is used in compost and mushroom growing, and we chose to avoid it. The certified spent mushroom compost we were hoping to bring in, and onto our veg beds has a whopping 25% peat composition – we just can’t do it folks! There are viable alternatives for mushroom producers to use, but it all comes down to market pressure for low cost produce.

Back to the drawing board…..

The next option for a compost is a product called PAS100, which is made from garden waste and heated up using the compost windrow technique. This is also an organically certified product, however, we’ve heard reports that a particularly troublesome herbicide was causing problems for growers using PAS100. Aminopyralid, is a herbicide used on broadleaf weeds but can take 15 months for soil bacteria to break it down. We didn’t want to risk bringing this onto the land either.

So, we ended up trying something out – we hired a turf cutter in March 2021 and removed the top layer of turf from all our veg beds. We piled some of it up and put some of it upside down back into the beds. We then tried different coverings: we covered the turfs in the beds with reused plastic and landscaping weed suppressant membrane. The rest we covered in a thick layer of wood chip that was in a nearby alley made from coppiced willow and hazel at Wakelyns 2 years previous.

We were hopeful that the couch grass wasn’t too entrenched in the ground but by the middle of May we watched the Couch grass begin to take hold again in some beds – not all, but it’s enough to tell us that turf cutting and a woodchip layer is not enough to suppress a dense area of couch grass.

To continue to plant seedlings into beds that are filling with couch grass is foolish, so we are only planting out seedlings into the beds which had the double upturned turf layer put on them. We will cardboard over the top, and place the weed membrane over the top of that, and plant through it in order to reduce the risk of couch grass getting a hold. This method, so far seems to be working well.

We have made the decision to scale back our veg growing this year as a consequence – this means we will run a limited number of veg boxes and we are discounting our box price as we won’t have the full range of veg in the ground that we were planning.

We set about exploring options around how to deal with couch grass effectively without bringing in large quantities of compost material.

Trials have been done in the UK using Buckwheat as an effective means of out-competing the couch but it seems to involve ploughing. You plough to expose soil in order to sow the seed and then you plough in the buckwheat after it flowers as it releases natural chemicals that inhibit the couch grass further. So to plough??

One alternative method would be pigs, probably Tamworths, as ‘natures’ plough, followed by chickens – the pigs would dig up the couch grass and create bare ground, we would sow the buckwheat, bring the pigs back to plough in the buckwheat, and then sow a cover crop and finish it all off with chickens? We loved this idea it felt like the natural solution however the logistics of managing animals while all living off-site was strongly advised against!

So we made the massive decision to plough and sow the Buckwheat. The guiding principle of no-dig is to cause little harm, and not plough on an annual basis, thus, not to be dependent on the plough. The advice we have recieved is that the mychorrizhal networks will recover very quickly because of all the trees – an advantage of an agroforestry system. And we will suppress the couch grass enough (hopefully) by using Buckwheat and following on with a winter cover crop.

We never thought we would plough our alleys but we are viewing it as an initally ‘needs must’ given all the circumstances.

Read the latest Wakelyns Newsletter Make sure you don’t miss any Wakelyns news. All our plans and events will feature

This website uses cookies to improve your experience while you navigate through the website. Out of these, the cookies that are categorized as necessary are stored on your browser as they are essential for the working of basic functionalities of the website. We also use third-party cookies that help us analyze and understand how you use this website. These cookies will be stored in your browser only with your consent. You also have the option to opt-out of these cookies. But opting out of some of these cookies may affect your browsing experience.
Necessary Always Enabled
Necessary cookies are absolutely essential for the website to function properly. This category only includes cookies that ensures basic functionalities and security features of the website. These cookies do not store any personal information.
Non-necessary
Any cookies that may not be particularly necessary for the website to function and is used specifically to collect user personal data via analytics, ads, other embedded contents are termed as non-necessary cookies. It is mandatory to procure user consent prior to running these cookies on your website.
SAVE & ACCEPT